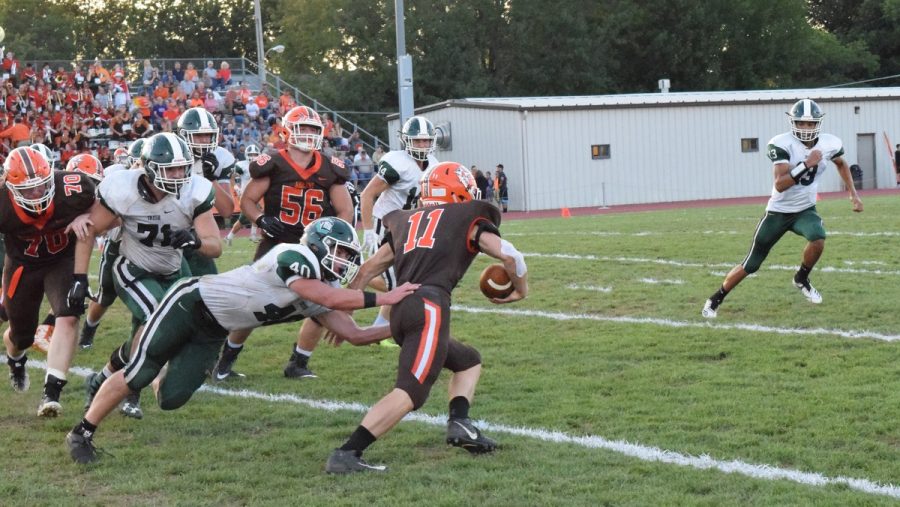 Senior Dakotah Whiteley (11) came into the game in relief of Mayden during this first half run. He would also come into relief for Mayden in the second half, alongside Albert Cross.

The Abilene v. Chapman game is a rivalry that has been marked as the best high school football rivalry in Kansas by ESPN. It also boasts the title of the oldest rivalry west of the Mississippi River. Since 1892, the Cowboys and Fighting Irish have battled for bragging rights, pride, and league standings.

The Abilene Cowboy football team suffered an embarrassing shutout loss at home to rival Chapman by a score of 26-0 on Friday, September 14th. There was no answer for Chapman running back Dalton Harvey, who rushed for over 200 yards and two touchdowns. Also, senior quarterback Izek Jackson and senior wide receiver Brandon Colston caused problems for the Cowboys all night, connecting on a number of key passes throughout the game.

After being asked how to go about improving the offense after the shutout, offensive Coordinator Brad Hartman stated, “Not doing the little things correctly is preventing us from being consistent, offensively. One missed assignment can keep a play from working, whether it be lining up wrong or missing a block.” The Cowboys will have a chance to correct little mistakes on Friday, September 21st at McPherson against a tough Bulldogs team.