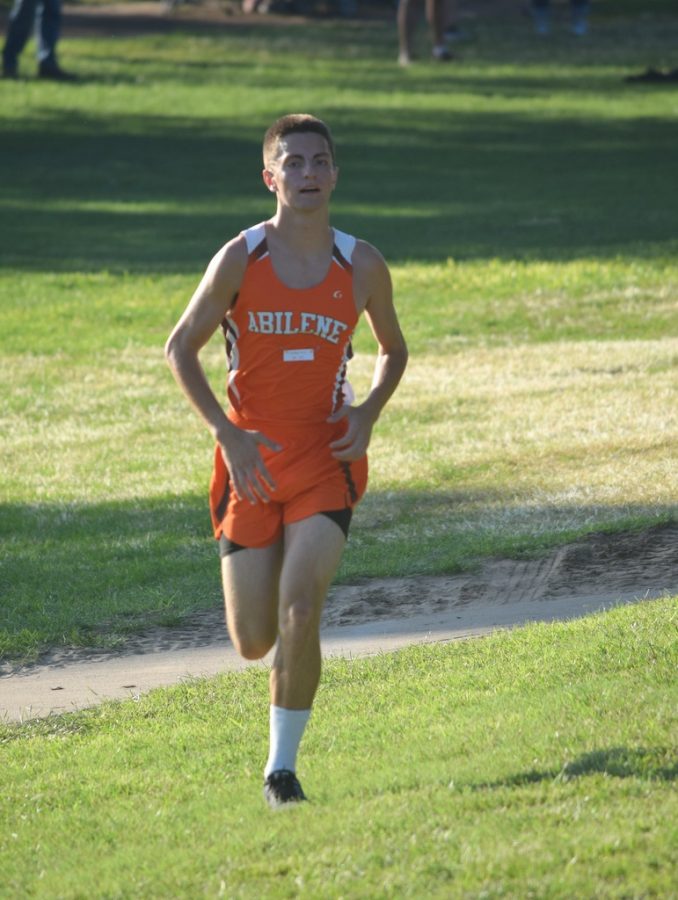 Aaron Geissinger pulls ahead of a hill in the 2018 Abilene meet. (Photo: Dave Linn)

Abilene High School – Summer mornings on Monday, Wednesday, and Friday had been eventful for the last few years. Coach Steve Simpson’s weights program began at 6 the morning. At 6:45, I was to leave to run summer cross country practice. This last year, however, was different. I was a senior, a leader whether I liked it or not. I led a group of kids out of the building and on a run determined by either Coach Andy Cook or Coach Tyler Bryson, or, in one case, Middle School Coach Alix Kunkle.

I was not a lone leader.

Each step I took on a run was accompanied by a young man who I had steadily grown to consider a running partner of mine. Faster, yes, on race day than he was in practice. I consider that my fault. Originally, he was a rival of mine–that sentiment quickly died when he beat me in every race.

Since then, he has easily become the fastest member of Abilene’s boys cross country squadron, as well as a primary chess piece on the track team. Most recently, he took eighth in Abilene’s home cross country meet, a meet steadily increasing in competitiveness as state placers recurrently run there to open the season. His stature amongst these runners on this first race, despite battling a lung bug and the elements, shows that he could possibly be the best runner Abilene has had since Andrew Schwarting graduated in 2015.

And he’s always attacked his running with the same weaponry: sometimes a smile, a wisecracking word, a meme, or a little jig if you’re lucky. The line between serious and happy-go-lucky isn’t blurred, and he’s learned how to switch between them perfectly.

Aaron Geissinger began his running career in seventh grade, like most other Abilene runners. He had previously played some wide receiver for a youth football team, but decided on a whim to run cross country instead, following his older brother Gehrig.

In middle school, he showed a knack for the sport. He consistently placed within the top 10 for races throughout his seventh and eighth grade seasons, shadowing Damian Hartman and Ben Wright before him. However, unlike those two, he entered the high school program to little fanfare, even amongst his own teammates. His ability was a shock to me, because nobody told me about him.

Joining the high school team, Aaron had few real goals or expectations for himself. He likes to say that he joined the team just for the fun of it, but in the end it seems he’s bitten off more than he thought he would—and chewed it well.

”I enjoy running cross country. It keeps me fit, but most of all it gives me a sense of purpose.” He smiles a wide grin after a few seconds of silence.

He balances his high-pressure athletics workload on his tiptoes. In one hand, he holds a susaphone. He has been a band member his entire high school career. In another, he holds his textbooks. A strong student, he holds high grades in each of his classes. “Aaron is a very conscientious student and always gives more than what is expected of him. His initiative and can do attitude is inspiring to see,” beamed his homeroom teacher, Mrs. Sherbert. On his feet, yet further still, are track spikes, worn with mud and mileage.
“I enjoy running cross country. It keeps me fit, but most of all it gives me a sense of purpose.” – Aaron Geissinger
“Aaron is a special kind of athlete for Abilene High School.” Head coach Andy Cook noted on Geissinger. “His frame is built for running long distance. He prepares in the summer and winter for his running seasons. During the season he comes to practice every day with a work-hard attitude.”

Cook has seen Geissinger develop for his entire running career. When Aaron joined the team in his 7th grade year, Cook was the assistant coach to Troy Emig. When Emig left and was replaced by Josh Rankin in Aaron’s 8th grade season, Cook began a summer running program, where he watched Aaron run and develop. Just this season, Cook was elevated to the interim head coaching spot following Rankin’s departure from the program.

He says the name “Geissinger, A.” has never been too far from the top of the list. He’s surpassed the 17 minute mark already, and is looking to shrink that down even further. To put that into perspective, he is running at a pace that tracks him at just under five and a half minutes per mile. And he’s getting faster. The average for high school students is seven.

“He is always in the first group in from the run and he has always been since the day he stepped into one of our practices. On race day, he goes out and competes for his team.” Cook continued.

And yet, somehow, his name is not even mentioned within the same breaths as the James Maydens and the Sydney Burtons of the school.

Aaron’s commitment to his team is further exemplified through the importance he places on being a teammate. In races, he is just as vocal towards the last runner as he is towards the fastest.

“He brings the energy,” Senior Megan Anguiano said through text. “He acts like a team leader because he’s the lead boy and helps lead the team to placing.”

But his influence stretches further than just the boys’ team. “He always greets the girls with high fives and a smile at the end of the run,” Anguiano continued.

Aaron handled this statement with a softer, more internal smile. “Yeah, I feel like every single person on team at least knows who I am and has received at least two high fives from me; possibly daily.”
“He brings the energy.” – Megan Anguiano
He is far from a silent leader, however. A very vibrant side of him comes out in laughs, a hard smile, and a friendliness that is so often absent from sports–especially at the high school level. While off-putting to many in a sport where the toughest adversary is the runner themselves, Aaron’s jovial tone and uplifting attitude fires up his teammates. “I think his comedic side helps everyone lighten up and be more prepared mentally to run,” said junior Max Dunnam. Having a reason to run, to many in the sport, is pivotal.

“He’s very supportive of fellow team members and pushes them to do their best.” Added Dunnam, a JV runner who has made strides in his development over the last year and is slated to run varsity alongside Geissinger next year. “He works very hard every practice, but his comedic side makes it seem like he’s not even in pain.”

”It’s not distracting, either.” Junior Triston Stover added. “Cross Country can be a demoralizing sport. Aaron is out here reminding us that it’s not against the rules to have fun.”

He still finds a way to deflect praise that comes his way, instead focusing on the team as a whole. “The team this year is hecking awesome,” he wrote in a web interview. “Next year, I don’t really know.”

This year might be one of the team’s last shots at a league placing. Aaron wants to be at the forefront of it.

He finished in a cold sweat, hands on his hips and breath coming in short bursts. This wasn’t new to him. His fifth official year running began in largely the same way as it began the year before: feeling a little rusty.

He turned, a quick hand held up high for a high five as I passed. And then another runner passed. And another. A smile popped right back onto his face, as if he had only been covering it throughout the run instead of it leaving his system.

Once everyone was back at the start, he turned his attention to the coaches and spoke with them for a few minutes about something or other—one day about strategy, the next about some of the freshmen and middle schoolers—before walking back down Mr. Padgett’s hill toward the side entrance of the high school. He had ridden his bike to school, and would ride back home.

As I took my brother back towards my car, parked in the parking lot just a bit further from the bike rack, Aaron passed me once again, this time with his arms out in the T-Pose meme. He grinned and laughed, as I did, before he took his own route home.

There’s something to be said about Aaron’s sense of humor. Even more impressive is his perseverance and continued rise in results, even as he continues to fly under the radar.

“Every race he runs matters.  Every practice he runs matters,” Coach Cook noted. A perennial hard worker with a shut-up-and-clock-in attitude, as Aaron would put it. That’s the way it’s always been.