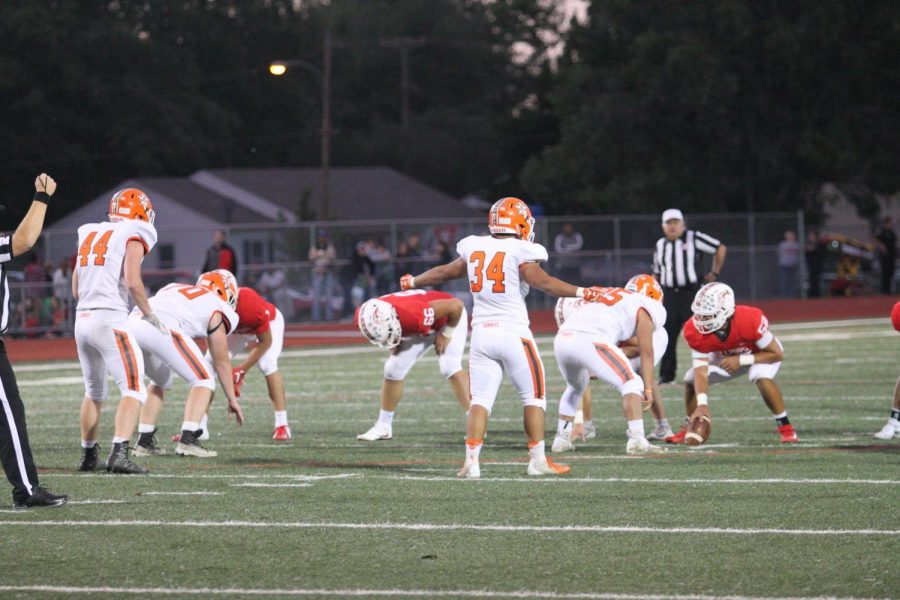 Linebacker Logan Anguiano (34) calls out a coverage shift before a McPherson play.

Abilene faced the McPherson Bullpups last Friday, September 21. The Cowboy Football Team suffered an embarrassing loss at McPherson with a final score of 62-6. The Bullpups were rolling the entire first half of Friday Night’s game, scoring 62 points. The Cowboys on the other hand couldn’t get the ball rolling and went scoreless the entire first half. In the second half, Caleb Burt finally put the ball in the end zone for the Cowboys while the Bullpups went scoreless.

The Cowboys couldn’t get anything going throughout the game, they were unable to grab momentum. Senior, Albert Cross left the game late due to injury. The Cowboys will travel to Towanda-Circle tonight to host a game against Pitt-Colgan. Abilene is looking to bounce back after the tough loss at McPherson. Senior Running Back, James Mayden will be returning after recovering from a knee injury that he suffered against the Chapman Irish.

When asked abut the game against McPherson, Logan Anguiano a Senior Linebacker replied with “We couldn’t really tackle, we weren’t blocking well, and we couldn’t really get back in coverage when we needed to. We also need to fix some defensive schemes and on offense we need to fix some blocking assignments, and we need to work on hitting the wholes a lot harder. We need to do a lot of little things to improve.”