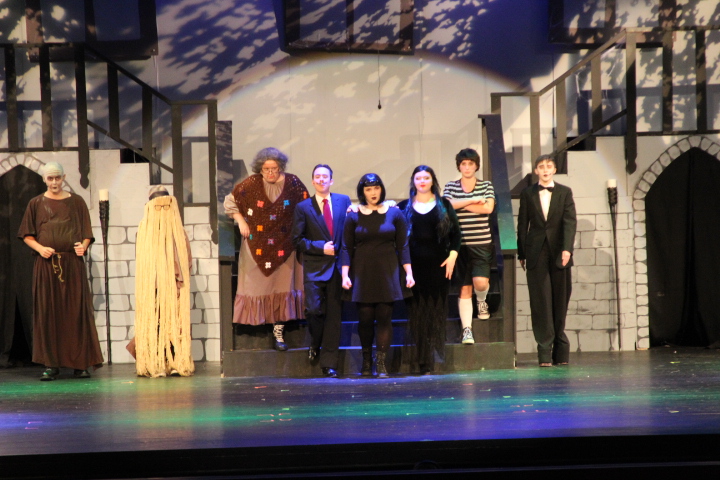 The Addams Family movies have been watched and enjoyed by many since the first became introduce to the world in 1991. Abilene High School welcomed a Broadway production about America’s favorite spooky but humorous family, directed by Chris Delay and Danette Whiteley. The role of Gomez Addams was earned by senior Jackson Welsh who stole the hearts of many. Morticia Addams was played

by senior Abby Elliot, sending shivers down everyone’s spin. The lovely, normal suburban parents, Mal Beineke and Alice Beineke were played by Lucas Cook and Liz Collins. The lovable, unnormal, and not as socially acceptable Pugsley, Cousin It, Lurk, and Grandma were played by Allison Liby, Grace Griffith, Ivy Tompkins, and Mara Coufal, respectively. Finally, the stars of the show and the child who won the hearts of the audience and the love of her life:  Wednesday Addams and Lucas Beineke were wonderfully portrayed by Harlie Delay and Dakotah Whiteley.

The AHS musical production was a complete success. The cast of the musical, as well as the audience, enjoyed the production tremendously. The Addams Family has been a favorite of many and has excited community members to watch it live at AHS. Each part of the cast was chosen to fit the individual as well as their personalities. There is next to nothing this group of young actors could have done to improve the show.

The cast of the musical did a beautiful job practicing for months, exicuting their works, and giving it their all. “I think we did well, and everyone gave it their all and it ended up having great energy and momentum,” said Jackson Welsh. As for advice for anyone and especially the cast members, “Try and enjoy things in the moment more.”