Chapman Throws Away Victories as Both Abilene Teams win NCKL

Chalk up another win for the good guys. 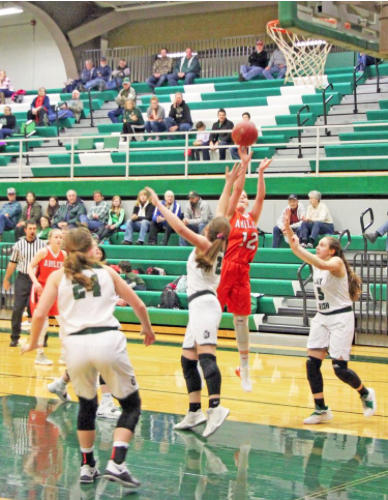 The most intense battle of the season was fought in Chapman’s gym on Tuesday, February 19th.

With games moved up due to inclement weather, the Cowboys and Cowgirls faced an interesting foe in Chapman, whom they had beaten in suspense-filled games earlier on in the season at home–the boys won 72-52 and the girls won 50-29–and the results were electrifying, to say the least.

The ‘Girls faced the Lady Irish having already won the NCKL outright after a victory against Clay Center the week previous, so the anxiety was not as palpable in this game as it was for the boys. However, it still garnered massive attention, as a loss would likely drop the Cowgirls out of the top-3 seedings in the state for the end of season tournament.

Like a lot of games before it, it just didn’t happen.

The ‘Girls took off like rockets, scoring in decreasing intervals of 2 after the first quarter’s 16 points compared to the Lady Irish’s 12 set the stage for a blowout. 14, 12, and 10 point quarters following gave the ‘Girls much needed breathing room. Senior stars Hannah Willey and Sydney Burton accounted for 24 and 18 points, respectively, while Jenna Hayes added six and Beth Holmes and Abi Lillard added two.

It was a different story for the Boys in Brown.

From slow start to exhilarating finish, the game was tightly contested. The first quarter ended with the Cowboys holding a minor lead at 9-7, but everyone in the gym knew that the Irish were well within striking distance for the entire game. Leads for either team never stretched into double digits. Despite leading at the half by six points, quick shooting from the Irish (specifically from Chapman’s sharpshooter Anthony Wasylk and big man Izek Jackson) saw the Cowboys’ lead disintegrate. The Irish led at the end of the third, 33-34.

“The stadium was so loud. Every time they scored the benches shook,” Manager Bode Strauss recounted.

But the Cowboys were never shaken.

The fourth quarter was a mess for both teams. Going back and forth until the last minute, nobody in the arena could tell if either team would win. The Irish held a sizable lead going into the final minutes, but the Cowboys mounted a comeback to pull within one score. Freshman Kaleb Becker tied the game at 42-all, and a turnover led to a Timmy Barbieri put-back to put the ‘Boys up by two with less than two minutes remaining. A spark of hope emerged once Wasylk fouled out, and it would prove to be pivotal. He scored all 11 of Chapman’s 4th quarter points, and the Irish would not score again.

Things only got more stressful in the last twenty seconds.

With the Cowboys down by one, Coach Taylor set up an inbounds play to senior James Mayden with over ten seconds left on the clock. Mayden put back the score, putting the Cowboys on top 46-45 with enough time left in the game for the Irish to score. Chapman called a timeout.

Chapman then tried to penetrate the paint with Izek Jackson, a ploy that had worked in both games against Abilene (Jackson scored 19 in this game). But with two brown jerseys in front of him, he was trapped and passed the ball to his teammate in green.

Who promptly turned the ball over right underneath the basket.

The Cowboys were not out of the woods yet. With five seconds left, senior forward Preston Boyd was called for an illegal screen, giving Chapman the ball back with 3.3 seconds left on the clock. With the Irish faithful holding their breaths, a last ditch effort to score was laid into the rafters…

…and fell well short of the basket. Cowboys win.

The team promptly stormed Chapman’s court to celebrate their NCKL victory before being wrangled up by coaches Taylor, Murray, and Graefe to shake hands. It was clearly the most exciting way the NCKL could end–a battle between two titans. The boys were ranked fourth in the 4A-West division, and Chapman was ranked third. Not after Tuesday.

Senior Preston Boyd led all Abilene scorers with 14 points. Behind him was Travis Beetch with 12, Tim Barbieri with 6, Kaleb Becker with 5 and James Mayden with 4.

Outright winners of the NCKL, Abilene will hold a top-4 seed for the state tournament and will likely play a 14-seed. More information on the tournament will be released when it is necessary.