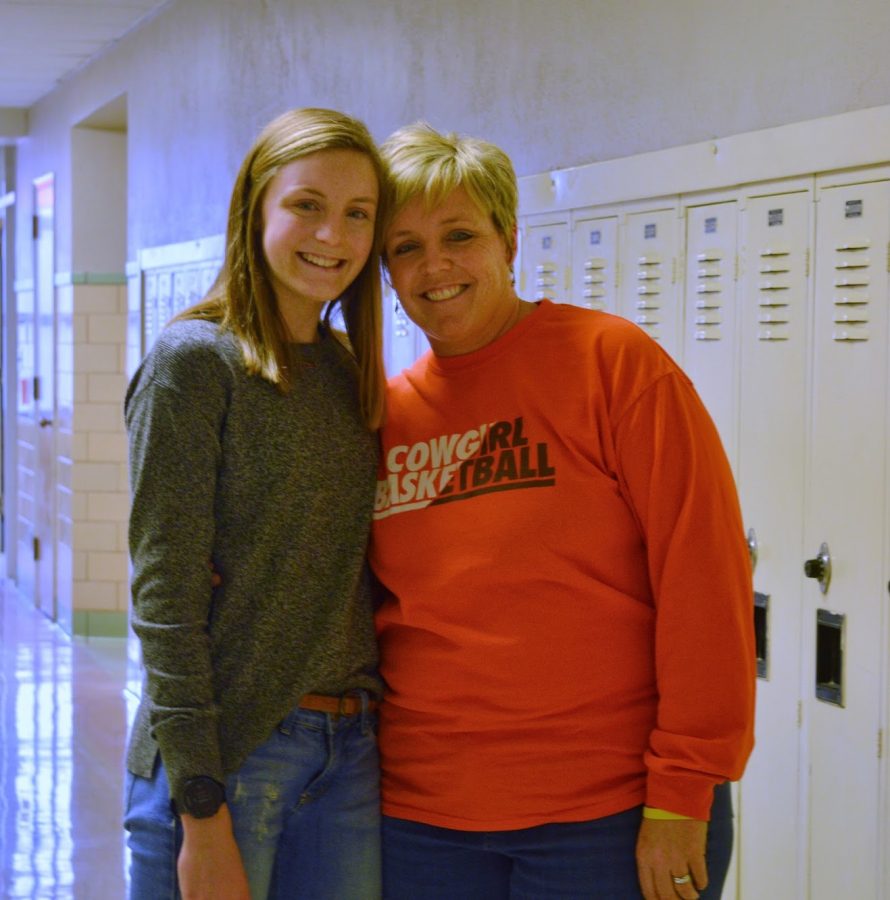 Abilene, being a small town, has a number of characteristics that set it apart from the vast number of shiny, cement cities.  Besides the generally tight-knit community environment where everyone knows everyone, Abilene is special in the fact that a good portion of community jobs involve or relate to Abilene’s one and only school district.

With the thought of having one or more parent as a teacher, some people would be instantly opposed to the idea, but the majority of students with parents as teachers at Abilene High School are unable to imagine school without their parent there.

Freshman, Maren Meneley is one of those students:  “It’s really fun because you get to see a different side of them that you don’t see at home. I just think it’s cool being able to see how they teach other kids and how they act at school rather than home. It’s just fun to watch and be apart of!”

Many of the students along with Nathaniel Tompkins, the son of AHS’ band director Mr. Tompkins, are proud that their parents are teachers.
“The best part of having my dad at school, is always having somewhere to go and someone to be with, it’s kind of a homey place away from home.” — Nathaniel Tompkins
Having such easy access to a parent throughout the day has its hidden perks too.  Typically, if a student forgets to have a parent sign a permission form, they would have to call their parent in to come in to sign; however, having one or more parent as part of the high school faculty, those students are simply able to walk to their parent’s classroom to have something signed.

Senior Sydney Burton agreed, “I’d have to say that overall having my parents as teachers has turned out to be fairly beneficial as they often remind me of school activities. I also only have to walk a few steps to get a parent consent form signed. . . .”

Having family members working at AHS also means that those students are able to see and interact with their parents throughout the day, whereas most students don’t see their parents until the evening hours after school, work, and evening activities.

Harlie Delay, a senior, loves having teacher parents for that very reason, “It’s nice to see them more throughout the day, especially since my whole family goes in different directions after school and we don’t talk until late at night.”  With Dylan and Harlie both being busy with high school activities and both parents working for the school district, those daily interactions become more valued.

The parent teachers of students generally feel the same way.  Mrs. Burton, who teaches Earth & Space and Anatomy & Physiology, full-heartedly admitted her feelings on having her daughter Sydney as a student, “I have loved having Sydney as a student and hope to have Sam at some point.  It feels no different during the actual class period, but at home it is fun to discuss topics of interest from class and listen to a student’s perspective.”

The most feedback teachers receive from students occurs in the classroom through educational discussions, but having a child as a student probably offers a more honest perspective to the class topics and activities.

Mr. Delay, the advisor for the Booster, commented by saying, “I have cherished the opportunities my job has allowed me to spend time with my kids, to be more involved in their interests and activities, and the chance to get to know their friends and classmates. . . . but it has certain level of anxiety/frustration mixed in with the enjoyment.  I know that I have certainly felt disheartened when my wife would ask the kids, ‘What did you do in school today?’ and they would respond, ‘Nothing.’”

It can be difficult for teachers to hear that typical response from students when they work so hard to make learning fun, especially when those students are also the teacher’s children.

Mrs. Meneley also faced challenges with being introduced to this special relationship, “The only challenge, and it was just something I had to get used to, was not having a specific separation between my school self (Frau) and my home self (mom).  Our worlds collided for the first time this year and it’s been a good experience.”

Even though the students with parents as teachers love having their parent teach at AHS, there also comes that awkwardness factor because as Maren said, “It can be awkward just because in class you have that realization that they’re your teacher and not your parent in that moment.”

When the parent becomes the teacher at the high school, it leaves the student to debate whether they should call their parent mom/dad or by their professional name.  “I remember not knowing what to call my dad, since “Mr. Delay” sounded too weird,” says Harlie.

“The worst part of being in your parent’s class is when other kids hate it. . . . (Side note—a strangely large number of people think that I want to hear why they hate my dad. I don’t!).”  — Harlie Delay

However, through the initial awkwardness, the students with parents as AHS teachers have come to love their unique relationship.

Sydney admitted her feelings towards the subject, “If I’m being honest, as a freshman I was super embarrassed to have both of my parents constantly in the building. I felt like people would make fun of me or avoid talking to me. People sometimes feel the need to speak highly of my parents in front of me which I’m assuming is because they fear if their comments were negative I would report them to my parents. I’ve grow to actually enjoy having my parents in the building and am no longer embarrassed!”

With having children as students and parents as teachers, there are always the people who think that those students receive special treatment or certain advantages in the class because of their parent.  That idea could not be further from the truth, at least in the case of the students and faculty members at AHS.

“I think teachers’ kids have to work extra hard to establish that they earned the grade instead of just getting it from their parent,” says Harlie, “I’ve always tried to establish myself as an independent person in my dad’s class.”  If anything, many students with parents as

teachers feel the need to work harder than the rest of the class just to prove that they have to work for the grade like everyone else.

“To avoid having it be perceived that there’s any favoritism,” said Nathaniel, “I have to practice hard, so that it’s not perceived as
favoritism if I make a good spot. I haven’t ever been made fun of, but there can sometimes be fun inside jokes.”

The parent teachers are on the exact same page.  Many teachers go out of their way to make sure that they do not give any type of special treatment to their child.

“I feel that both our children display a strong work ethic,” said Mrs. Burton. “Their actions speak for who they are. In fact, I’m sure if you ask my children they would probably tell you I’m tougher on them than I am on other students/athletes.”

Even though there is no reason for the students to work harder to prove that they are not being favored, many of them do to emphasize that point of independence.
“They earn their grades just like all my other students.” — Mrs. Burton
Having a parent as the school principal is just as open to public criticism over child favoritism, but that idea is just as false as it is with the student/teacher relationships.  Dr. Smith was open with the topic when asked if he had ever been accused of child favoritism, “Both boys would be appalled if they felt they got an advantage due to my position, and I don’t want them to have an advantage that has been granted through inappropriate means. I am careful never to overstep, and if I ever have to talk to a teacher, I try to use language from a parent point of view and not a principal point of view.”

Even though most people would consider the prospect of having a parent as a teacher as nightmarish, the steady truth for the students and faculty members at Abilene High School is the exact opposite.  Every relationship has its challenges, and whether that be the student’s uncertainty of what to call their parent in class or the challenge of proving favoritism false, the overall feeling between the child and parent does not change.  What the students with parents as teachers have learned is that embarrassment only exists if one allows it to exist, and nothing can change that type of love.