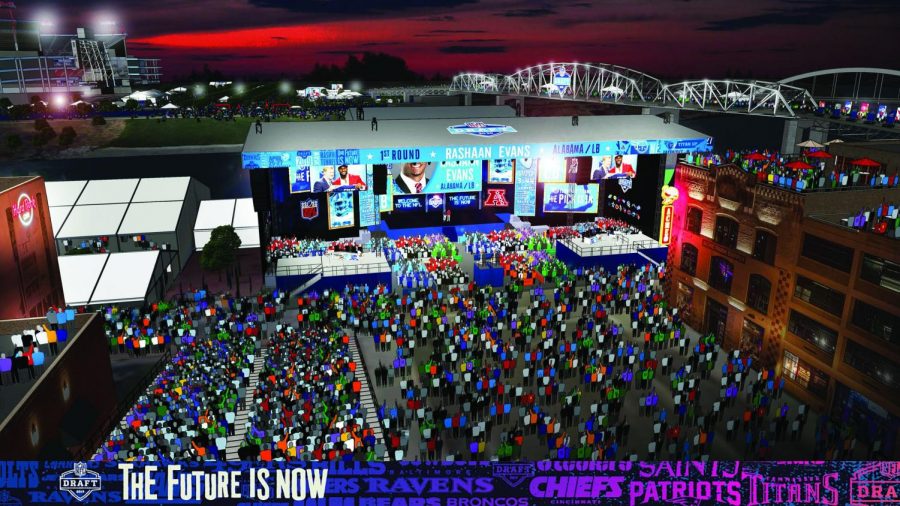 The Tennessean’s mock-up of the Draft’s stage. The draft will begin tonight, April 25th.

Mock drafts are the ultimate exercise in futility.

No matter how hard the talking heads at ESPN or NFL Network try, they will never get a correct mock draft because it’s always changing. Nobody ever gets the picks 100% right. And that’s okay, because I’ve always found mocks fun, even if the Chiefs traded away their first round pick.

Jon Gruden loves Kyler Murray. This is kind of obvious. But with this trade, the Cardinals seemingly fleece the Raiders into giving up valuable draft capitol to take a spectacular QB with Derek Carr, a former MVP candidate, still on roster.

Bosa is the best pure pass rusher in the draft. Pairing him with Dee Ford and the rest of the 49er D-Line will make facing the Niners a nightmare for NFC West offenses for years.

News came out that the Jets and GM Mike Maccagnan were in the process of gaining more picks. Murray going at 1 might send a trade frenzy for a QB, so Broncos GM John Elway jumps over everyone to grab the second coming of Kyle Boller. Another bust at QB for Elway, especially at 3 overall, but one that seems very likely for him to make.

Arizona needs players everywhere. Quinnen Williams should have probably gone first overall due to sheer talent. New coach Kliff Kingsbury grabs himself a cornerstone for his defense, proving to the world that he’s not entirely focused on offense. Yet.

The Bucs grab themselves a linebacker to slot into new DC Todd Bowles’ defense here. Don’t be surprised if the Bucs surprise the draft world here with a shocker selection, though. They’re at bit of a wild card.

This draft has the potential to be chaotic for the first few picks. This continues with Oliver, who Atlanta would surely covet due to his plug-and-play ability on the defensive line. Don’t worry, Big Blue, your QB is still coming.

T.J. Hockenson is good. He’s just not top-10 good. No tight end is. Looking at you, Eric Ebron.

Haskins goes to a place he doesn’t want to go because Dan Snyder is a terrible human being who makes terrible QB choices. Perfect pick so far!

Buffalo could go for another defensive playmaker here, but I think they’d rather give Josh Allen some insurance on the O-line.

His heart issues aren’t going to scare off teams who paid attention to the Oakland Raiders rookie class last year. Mo Hurst did fine enough, so I doubt that Sweat, who wins with athleticism and precision, would fall further than the top 15.

Zac Taylor isn’t getting rid of Andy Dalton with his first round pick. That defense has some issues, and getting a rangy linebacker to help will definitely set some grounding for the 2019 season.

Fant is more athletic, Hock is more reliable. Take your pick. I think Green Bay might go for the more traditional of the two Hawkeyes with this pick.

It seems like Miami’s been rebuilding their defense since 2003. I don’t think this is where they take a QB, either. Expect them to swing for a Tyree Jackson later, but protecting Ryan Fitzpatrick with a solid O-Lineman here would help the team as a whole.

They miss out on Haskins, which would be the dream pairing, but a lot of evidence points towards the front office being ambivalent to either Jones or Haskins. Gentleman gets his man, and the Giants languish in agony for another fifteen years. Probably not.

They’d rather have Sweat, but I think Matt Patricia would be fine with the sleek Seminole as well.

Space. Eaters. Carolina needs a lot of those, though I think they could be another wild card.

Remember when he did the splits? Especially after taking Jones, NYG needs to remember their issues on defense. They could address that with Wilkins.

Mini soda needs some more hogmollies up front to protect million dollar man Kirk Cousins. A few pieces on the O-Line will help Cousins prove whether or not he’s worth that price tag.

Tennessee is difficult to figure out. Here I have them taking the safe pick of a defensive lineman, though they could go out on a limb and give Marcus Mariota a weapon with this pick.

It’s either him or Rock Ya-Sin. Developing corner picks might not be all the rage right now, but that seems like what PIT might do. That, or trade back with the Seahawks.

They traded with the Chiefs to get some youth on the defense. Here’s one pick that might help.

A lot of league execs say he’s better than Metcalf, and I’d agree. Lamar Jackson, paired with an electric wide receiver as a down field threat? Terrifying. Cleveland doesn’t have this division won yet.

Gotta find the Beast Mode replacement. He doesn’t have the same tools, but he definitely could help Derek Carr/Kyler Murray take a load off.

Some of the corners on that roster are getting a little older. Williams has great size and could contribute game one.

Here’s the splash. Metcalf would run rampant in Kliff’s offense, especially with the opportunity to learn behind Larry Fitzgerald. In three years, no matter who’s behind center, he might lead the league in receptions.

I hate this pick because I love Ya-Sin, but it’s a move I feel like the Chargers should make in order to compete in divisions with Patrick Mahomes, Kyler Murray, and Drew Lock.

Seattle gets some secondary help. Don’t be surprised if they go with Delaware’s Nasir Adderly or hometown hero Taylor Rapp with this pick, either.

Is he older? Yes. Will he protect Aaron Rodgers? Yes. Underrated prospect because I’m a K-State fan.

TAKE THAT, NEW ENGLAND. This provides Jared Goff with yet another athletic weapon. I wouldn’t be surprised if Fant takes a Travis Kelce “big wide receiver” role in LA.

The Pats miss out on Noah Fant and settle for a hybrid linebacker. The world is a slightly better place. Of course, they could also take Alabama’s Deionte Thompson.