Art in the Community 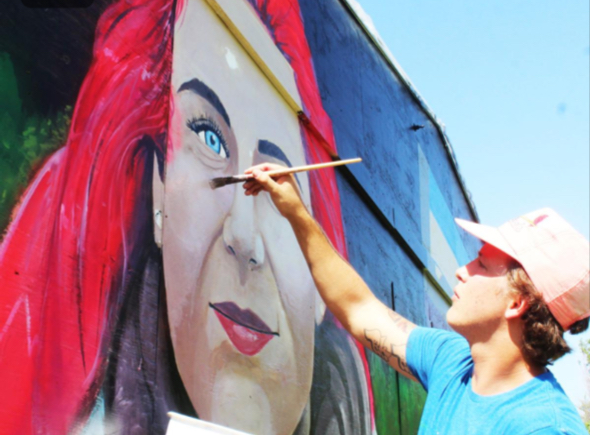 Having various displays of artistry around a community has more of a meaning than just being paint on a wall that forms shapes. For it is a being that will enact a sense of nostalgia or infatuated longing to be young again and how it was to live in simpler times in years down the road. For art bears ambiguous meaning based on the perspective of the onlooker.

On June 26th, 2019, Kansas City graffiti artist Whitney Kerr III pulled into the Abilene on ramp after hours on the road. There to meet him was Sam Geissinger, Advisor of the Dickinson County Arts Council. After brief discourse between the two, Geissinger lead Kerr to the place in which he would be painting his first mural in Abilene. The place where the mural would be put up was at the Cedar House Recovery Center, on the greenhouse.

The Cedar House is a recovery center run by former New York stock broker Patti O’Malley. The mission is to provide a safe space for women who are recovering from abusive relationships. The Cedar House provides them a living space, some cash, and a steady work schedule. It was even voted as the nicest place in Kansas.

Whitney Kerr’s first community art piece was begun on July 16th. He said, “I wanted to do something that represented Abilene.” There to help Kerr begin was Patti O’Malley, who took him around town and showed him the prominent components of this little town. After careful consideration and painstaking hours of contemplation, Kerr decided the font and what pictures would represent his mural. “The tricky part was finding something to put in the L, eventually we settled on C.L Brown.”

C.L Brown was the man responsible for innovating the modern telephone. Born and raised in Abilene, KS, he became the minute man for modern companies such as Sprint, AT&T, and even Westar Energy. At the time of The Great Depression, 79 of Brown’s 85 companies survived. So essentially, C.L Brown was kind of a big deal.

There to accompany Kerr with the masterpieces was fellow artist Chase Hunter. The two met at the Memphis Art Institute. “I knew this was going to be a long time friendship.” said Kerr of his accomplice.

Many early mornings and late nights, the two art aficionados finished the opulent Abilene sign. “We had a lot of support from the community, people were here to help us in any way possible. Art really connects small communities.” said Chase Hunter.

After a week of planning and consulting from the railroad, Hunter and Kerr executed the start of their next project. A 16 foot long steam locomotive was to be painted on the side of Abilene Printing. 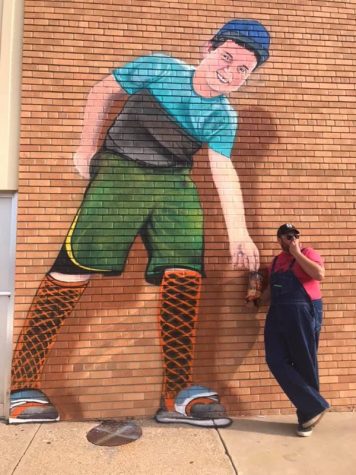 “We weren’t done yet.” said Kerr. On the faithful day of August 3rd, Whitney Kerr started on another big project. The project to be was a boy scaled to 16 feet high, with a hook in his hand. This was to be put as an interactive mural for people to hang on the hook and take pictures. After careful consideration, the subject of the painting was 10 year old Harmon Geissinger, yes, my brother.

The mural was completed on August 8th and captured by Tim Horan of the Abilene Reflector Chronicle that very same day. Many people have interacted with it and said that it is a great piece and representation of our community as a whole.

Seeing random people take pictures with the mural will fill me with a sense of nostalgia down the road for sure. These murals are more than paint, they’re the knot that ties this community together. All in all, Abilene is a very tight knit community, and it’s going to take a strong pair of metaphorical scissors to cut that knot.

Whitney Kerr will be back in town in the near future. But until then, you can keep up with him on Instagram @whitney_kerr_paints.