Look Mom I Can Fly 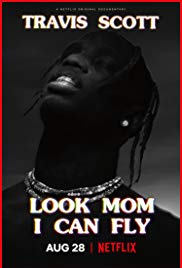 This past weekend I was able to check out the new Travis Scott documentary on Netflix called, “Look Mom I Can Fly.” The documentary takes you behind the scenes of the making and tour of the famous album titled “Astroworld” by Travis Scott.

Travis Scott, born Jacque Berman Webster on April 30th, 1991 is a world famous rap music artist with popular songs you may know like “Sicko Mode” and “Antidote”. Travis Scott is seen as one of the more energetic and popular artists to see on stage. With his loud music, stage dives, and his ability to rap with his fans, he knows how to keep a crowd interested. This is why he usually sells out his shows.

Not only does the movie take you behind the scenes, it also shows you where Travis Scott came from. Travis Scott is from Houston, Texas. The Houston native can be seen throughout the movie hanging around his friends and family while talking to his producers. Overall he seems pretty laid back but also excited at the same time. When asked, senior Zach Juhl said, “I am now a huge Travis Scott fan. He is now one of my favorite rappers of all time. Getting to see how his album was made was really interesting and cool to watch.”

All in all, this is a pretty cool look at the process of the making of “Astroworld”. If you haven’t yet, I highly recommend watching this documentary. Who knows, you may just end up being a huge Travis Scott fan in the long run. You can view the movie on Netflix, find a way to check it out.