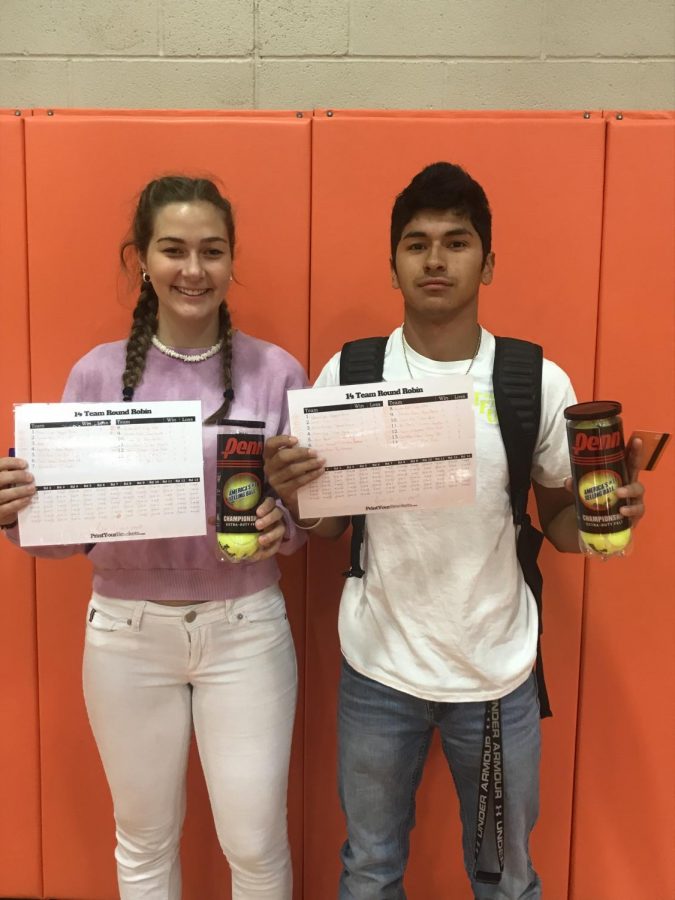 The PE department hosted their first annual tennis tournament for the Individual and Dual Games class, as well as for Advanced P.E. Congratulations goes out to all participants as each tournament was competitive for all.

In 1st block Individual and Dual games, there were 14 teams slated to play. A round robin tournament was held for this group, so each team was able to play 13 times. After some stiff competition, there were 2 teams that ended with the same record. Christian Radabaugh and Sarah Samsel ended with an 11-2 record, along with the dynamic duo of Triston Stover and Sierra McLaughlin. With these 2 teams finishing with the same record, there was a head to head clash for the tournament championship. Radabaugh and Samsel were eventual champions with a game count of 3-1.

In 2nd block Individual and Dual games, again there were 14 teams scheduled to play. We chose a round robin format for this class’s tennis tournament as well, so each team played 13 times. There were several teams at the top of the leaderboard up until the last round of tennis to be played. Foreign exchange student Martin Fusinaz and his partner Hannah Caceres were the group flying under the radar. Their silent tactics and their ability to keep the ball in play catapulted them to being one of the top tournament contenders. Avery Bryson and Steven Zelniker were the powerhouse team. They were putting teams away with aggressive net play due to their size.  However, in their last round of the tournament, they played a team that had a little more experience. Bradley Mascareno, Cooper Wildey, and Abigail Lillard were the only trio team in the tournament. They entered the final round with only once loss, thanks to some previous tennis experience. Their final round opponent though was the powerhouse team of Bryson and Zelniker. Bryson and Zelniker gave them a good match but were unable to overcome the experienced tennis trio. Mascareno, Wildey, and Lillard held on to win with a match score of 2 games to 1.

In the single’s tournament, we played a double elimination tournament, so each competitor had to be defeated twice to be ousted from the tournament. In the beginning rounds of the tournament, there were some really close matches played. Competitors rose to the occasion of bringing their “A” game. Kieryan Anderson was the predicted champion of the tournament. He very quickly made it through the first couple of rounds with minimal effort. Lefty, Wyatt Schmitt, gave Anderson all he wanted, and won 2 games against Anderson. That was Schmitt’s first loss, but he fell quickly in the loser’s bracket to an athletic Chrisxavier Cease, which booted him from the competition. Cease had fallen to Anderson early in round one competition but worked himself back through the racks of the loser’s bracket. After defeating Chuck Stuckey, Jayshaun Jones, Wyatt Schmitt, Kade Funston, and Colby Mohr—all on the loser’s side of the bracket—Cease found his way back to a chance at a championship victory. However, having to play several matches in one day proved to be too much for Cease. In the championship match, he again faced serving phenom Kieryan Anderson.  Cease folded quickly and handed the championship over without a fight. Anderson won 3-0.

Again, congratulations to all participants. I hope to see some of you back next year…for a fun and competitive 2nd annual Physical Education tournament.