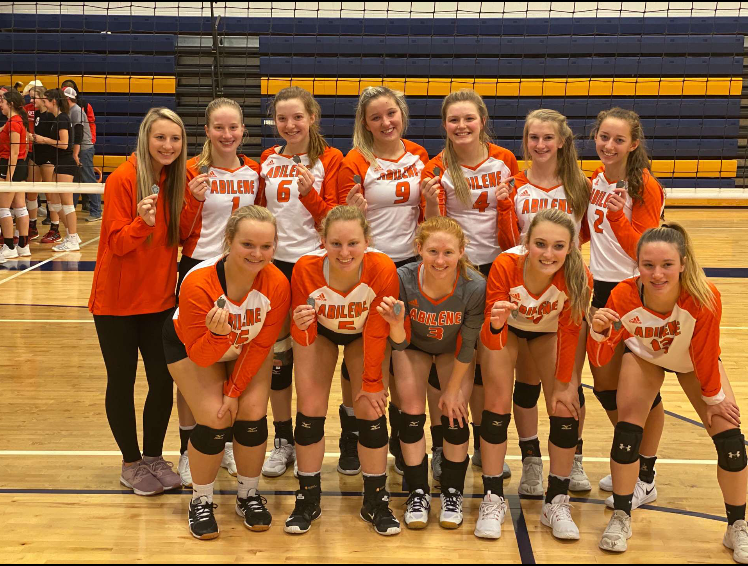 Beth Holmes is a senior student here at Abilene High School, who is deeply involved in our AHS community. Beth Holmes is the head of the student council and participates in volleyball, basketball, track, and summer softball. Due to having so much going on, she rarely finds herself having any free time. As you can see Beth is an active and well-rounded student, but her most recent activity is volleyball.

Ms. Holmes has been playing volleyball since second grade. She informs us that Abilene’s current record is 15-10. Beth says that their teams biggest strength this year is the strong bond and connection between each other. “We all love being together, so we don’t see playing as hard or annoying, we just enjoy being together.” Their team’s greatest skill strength is that they don’t have just one really good player, their whole team is great! Beth says that the team’s greatest weakness is the lack in confidence and/or communication, but they are working on it.

For the players to prepare themselves during the summer, they lifted weights four days a week and joined the summer league. According to Beth they also did jump training to improve their verticals. Beth states; “I always try to be positive no matter the outcome of our games and no matter the level of competition we are about to face. If my teammates know I have all the confidence in the world for them, hopefully they will think the same thing for themselves. I always tell them to forget about their mistakes because everyone makes them. I try to be happy at practice and games to keep the atmosphere positive.”

According to Beth, volleyball has never been her favorite sport. She has always just played because her friends did and she found the fun in it. Volleyball has taught her a lot through the years in communication skills and leadership skills. Beth believes teammates need to be open with one another in order to be a successful team.

Being the captain of the team this year, Beth has grown because of it. “I’m extremely thankful for that. Volleyball is extremely fun and I’m going to miss it when the season is over.”

Beth is an extremely well rounded and diverse student whose finds herself in a varies of leadership roles. She is an inspirational peer that reflects the best here at AHS.