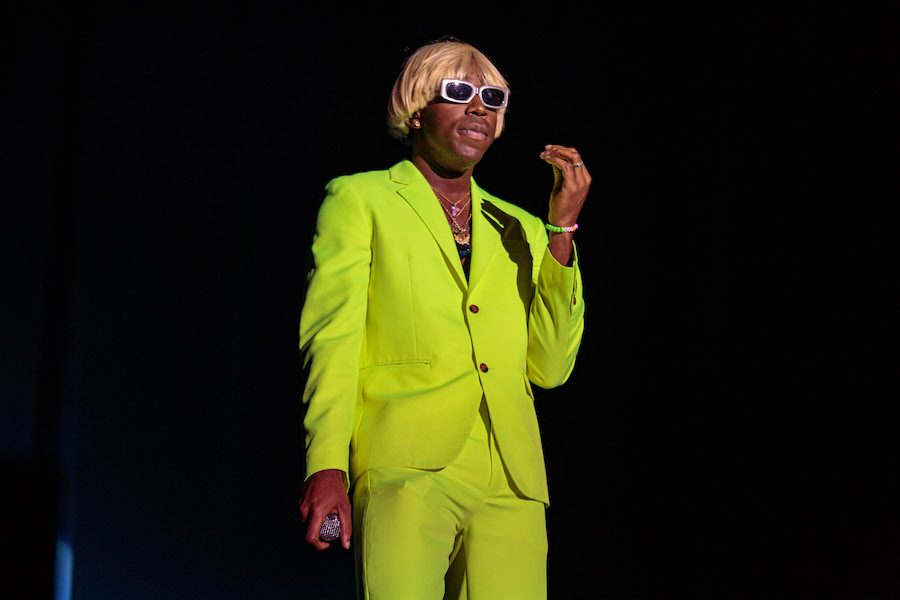 With the release of Igor on May 17th, 2019, the Igor Tour began only three months after its release. With 19 songs on the track list, Tyler’s performance was outstanding.

After GoldLink and Blood Orange finished their sets, people began to become antsy as they waited for Tyler to come on stage. There were several moments where everyone thought he was going to come out on stage, but he didn’t. This made everyone more antsy.

The first song that played was “IGOR’S THEME” and the long intro allowed everyone to scream and cheer at his sudden appearance. Believe me, I was one of the many people screaming.

Everything was moving so quickly, and the whole crowd was jumping with an energy that didn’t last long for me.

Many of his songs had everyone jumping, but I wasn’t ready for the experience of moshing. When a song would start, everyone began shoving each other back, forming a huge empty circle. They pushed everyone without a care, making sure the circle was big enough. As soon as the hard parts began, everyone immediately slammed into each other, excitedly jumping around, slamming into their friends and the strangers around them.

I didn’t know what to expect, but I wasn’t prepared for the absolute chaos that ensued. Attempting to keep up with the crowd was difficult, and I was surprised how difficult it was to jump while screaming to the music.

Not only was keeping up difficult, but trying to remember every lyric was especially challenging. The first time I had ever listened to Tyler, the Creator was two years ago (2017) when Flower Boy was released. Trying to remember lyrics from several years before that was almost impossible. When “Okra”, “IFHY”, and “She” played, I spent that time watching Tyler fling himself around on stage instead of forcing myself to try to think of the lyrics.

Tyler spent very little of his time talking to the crowd, but he began with letting the audience know that he was confused where he was. He had the crowd yell if it was Kansas City or Independence. He then clarified that a “black man with dreads” was “staring into his soul” and “shaking his head”. He decided to meet everyone in the middle by just saying Missouri.

Later in the concert, he called out a few dudes for taking their shirts off. He then realized that another guy had taken off his shirt after that, and called him out too. Even though he spent very little time talking, he had the crowd laughing at his antics.

Finally, it was time for my absolute favorite song. It was time Tyler performed “See You Again.” Once we realized what song it was, I finally pulled out my boyfriends phone (I didn’t have mine all weekend; it was rough) and began to record. The screen was ombré red to an orangey-yellow, with vibrant green lights flashing to match the Flower Boy album cover. The song was even more beautiful live, and finally watching my favorite artist sing my favorite song fulfilled all of my dreams.

I specifically remember telling my seminar teacher, Mr. Moyers, that “ARE WE STILL FRIENDS” was going to be an amazing ending song. I was very correct. The rush of the previous bangers playing and the sadness of knowing that the concert was four and a half minutes away from ending made the experience even better. The lights were flashing and moving, with several stunning colors.

Sadly, the concert came to an end. Tyler left the stage and the lights came back on. Looking around at everyone was weird, as I had been focused on trying to see Tyler the whole time. The floor was littered with beer cups, and I felt bad for the workers. It could have been worse, but it was still a mess.

Thankfully, my boyfriend and I had bought merchandise before the concert (best $80 I had ever spent) so we avoided the mess of waiting in line, only to discover that the item you wanted was sold out. Walking to his car, we discussed our favorite moments, with “ARE WE STILL FRIENDS” echoing through my mind.