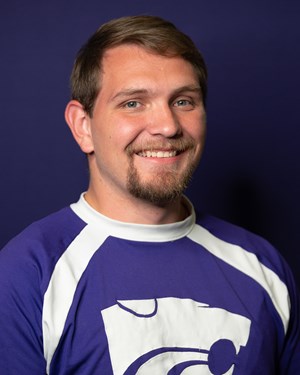 Every student and teacher currently at Abilene High School has a few hobbies they are fond of. Some are more exotic than others, while others are mellow. One unknown past time that may be news to some includes Agriculture teacher and FFA adviser Zach Cooper’s time as a K-State cheerleader. I had the opportunity to correspond with Cooper to get a more in-depth look into his world of cheerleading.

Why and when did you decide to become a cheerleader?

“During my first two years of college, I worked for K-State Athletics as a security supervisor. As I worked basketball, volleyball and football I had the chance to meet many people. During basketball season, I got to know Coach [Ruoff]. One game towards the end of the season, we had a double header. Between games, the supervisors were just relaxing and talking. I had said that I felt like I was out of shape, just as Coach walked by. She spoke up and said if I felt that way, I should go to their practice that week. I thought I would go in, run, lift weights, and I would have my workout in for the year. But when I got to the indoor, Coach put a girl in front of me and told me to throw her and catch her. After a few tries and getting to know the team, the coach came up and said ‘Tryouts are this date. Hope you decide to tryout.’

After my sophomore year of college and I finished Swing Dance Team at K-State, I joined the [cheer] team. For the last two years of my undergrad, I was on the team, and now that I am a grad student I am serving my 3rd year on the team.”

How much time do you spend practicing your routines?

“This is a little harder to say. We have so many events going on all at once, that we really practice multiple routines all year. We have three cheer and stunt practices, two condition practices, and for the gentleman, we have 2-3 days of lifting a week.”

What’s your favorite part about cheering?

“My favorite part of cheering is the team. [They are a] great group of individuals that become family. No matter the kind of day you may have, they will be there and support you and make your day better and push you to reach new levels.”

What would you consider the most memorable event you have been apart of?

“This is a tie. The first one was Bill Snyder’s 200th win as a coach against KU. Just seeing the history of the event take place and being on the sidelines [was incredible]. The second one [was] going to the Cactus Bowl. We left Christmas Eve and drove all the way down to the game. The friends I made and the experience [itself] made the 19 hours on a charter bus with 400 band members worth it.”

Do you consider cheerleading a sport?

“When I was in high school I did not. I graduated with six kids in my class, and we didn’t have cheer. But now that I have been apart of it, I would say it is. [It] takes just as much practice as any other sport, the same discipline, and same teamwork to accomplish a goal. K-State Cheer works through blood, sweat, and tears. To be honest, out of all the sports I did (football, wrestling, and track), cheer pushed me more in some of our toughest practices. [Here’s] some random facts; cheer has the most injuries than any other sport, cheer was started by guys originally, and President Bush was a Yell Leader in College.”

Do you find being a male cheerleader comes with criticism and backlash, as cheerleading is predominantly a female-ran hobby?

“On the high school level, I would say I hear more criticism. But in college, I had lots of support. No negative comments from anyone. I think it is because in college there is more maturity and acceptance, and they know how hard we are working.”

Cooper finished our interview by saying he never thought he would do cheer. He encourages others to “never dismiss an opportunity because of other people’s thoughts. Opportunities multiply as they are seized. You never know if you will like something until you try it.”