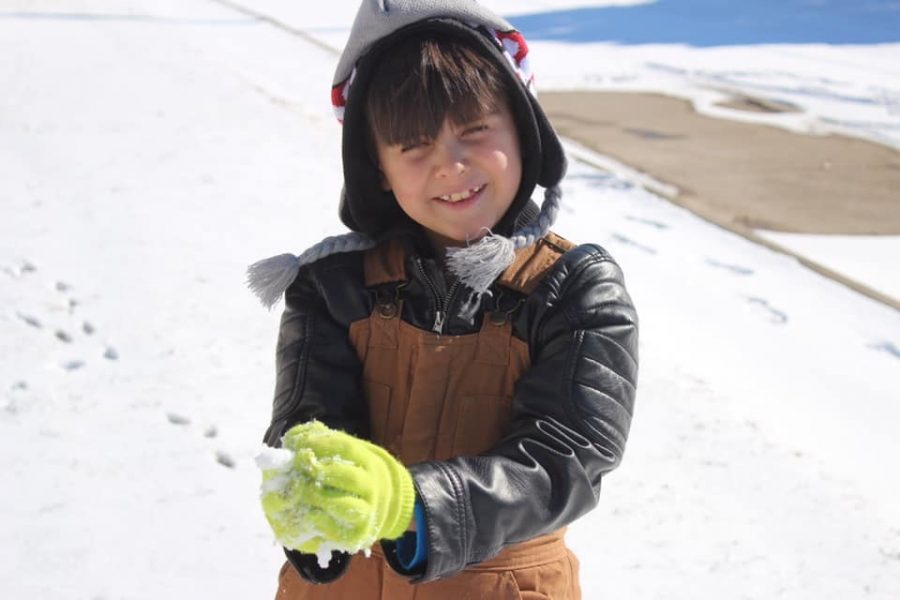 If you’re in high school, it’s safe to assume that you’re struggling. We all have our struggles, whether it’s writing papers, doing math problems, or just doing your homework in general. Students at Abilene High School acknowledge that some people have learning disabilities, such as dyslexia or autism. There’s another disability that has affected the lives of Abilene residents, and that is hearing.

From a young age, hearing was a huge part of my life. My oldest sister, Jazmean, was born half deaf. As an adult today, she struggles with hearing things clearly, even while wearing her hearing aids. My nephew, Gabriel, was born with perfect hearing. He showed no signs of hearing problems, but developed a cholesteatoma. Here is part of his story of living with his disability.
The Diagnosis
According to healthline.com, a cholesteatoma is “an abnormal, noncancerous skin growth that can develop in the middle section of your ear, behind the eardrum.”

Healthline continues to explain a choleasteatoma, “A cholesteatoma often develops as a cyst, or sac, that sheds layers of old skin. As these dead skin cells accumulate, the growth can increase in size and destroy the delicate bones of the middle ear. This may affect hearing, balance, and the function of facial muscles.”

This disease developed in Gabriel’s ear, eroding his ear bones and ear drum. The only way to get rid of it and for him to recover was for him to have surgery.
Surgeries
Gabriel had two surgeries total: the first to remove as much of the disease and to repair his ear drum and the second to put in substitute ear bones.

The first surgery had everyone nerve-wrecked. Children’s Mercy paid for a hotel and for the drive to Kansas City, so we spent our first day exploring and allowing Gabriel as much fun before the impending tough day tomorrow. Gabriel, me, my mom, and my dad woke up extremely early to drive to Children’s Mercy and check in. This surgery was to remove most of the disease ridden areas and to create a new ear drum for Gabriel.

The second surgery was to remove the rest of the disease, and to put the new ear bones they created in. Unfortunately, the doctors were unable to put the new bones in. The tube that goes from the nose to the ear (the pharyngotympanic tube, to be specific) was too narrow and would cause his ear drum to pop over those bones.

He went into surgery smiling and cheery, and came out grumpy and tired, as expected. Through all of the pain, Gabriel returned to his regular self quickly.
Moving Forward
After his second surgery, the process of returning to normal began. Once his incision healed, Gabriel could finally go swimming during the summer, like the average kid. The previous summer, Gabriel could not go swimming due to his surgeries.

The most difficult parts during the healing process for Gabriel was taking it easy and the smell.

Gabriel is an energetic little boy who loves to roughhouse, especially with his little brother Adryan. If it isn’t running around with Tonka trucks or race cars, he was probably playing hide and seek or just running around in general. Having surgery meant being more calm in order to allow his wound to heal. Sitting still has never been so challenging.

For some reason, during the healing process, Gabriel’s incision emitted a strong smell that wasn’t pleasant. I’m still not completely sure as to why his ear had the smell, but it’s safe to assume it was drainage from his ear canal.
Hearing Aids
With the inability to return the faux bones into Gabriel’s ear, he would still have significant hearing loss. This meant that Gabriel would receive a hearing aid! Choosing a design wasn’t difficult;  Gabriel settled on a red shark (his favorite animal and his favorite color) on top of a sparkly-blue background.

Before receiving his hearing aids, Gabriel struggled with learning and paying attention in class.  “I couldn’t really hear what the teacher was saying.” he explained. When asked if he talked to the teacher or left it be, Gabriel answered, “Let it be.”

Thankfully, Gabriel was allowed the wonderful opportunity to receive the help he needs in order to catch up in his learning. Getting used to hearing everything at its normal volume was a struggle, as wearing the hearing aid consistently hurt Gabriel’s ears. When he doesn’t wear his hearing aids, you have to say things really loud, or else you’re stuck in a loop of “what?” or “huh?”

Before Gabriel’s experience with struggling to hear correctly, I had never really thought about all of the effects that this problem has on your life. Just from the inability to hear, Gabriel was behind with his motor skills. Before, reading was something that Gabriel seemingly hated. The most simple sentences left him frustrated. Today, Gabriel is excited to read, and often asks me to read chapter books with him.

Seeing the growth and success of this sweet little boy has been so amazing, and one of the best learning opportunities my family has had. Gabriel has always been so smart, but now he loves for us to quiz him with difficult math problems and reading quicker. Who knew something as unacknowledged as hearing loss could have such an impact in life.