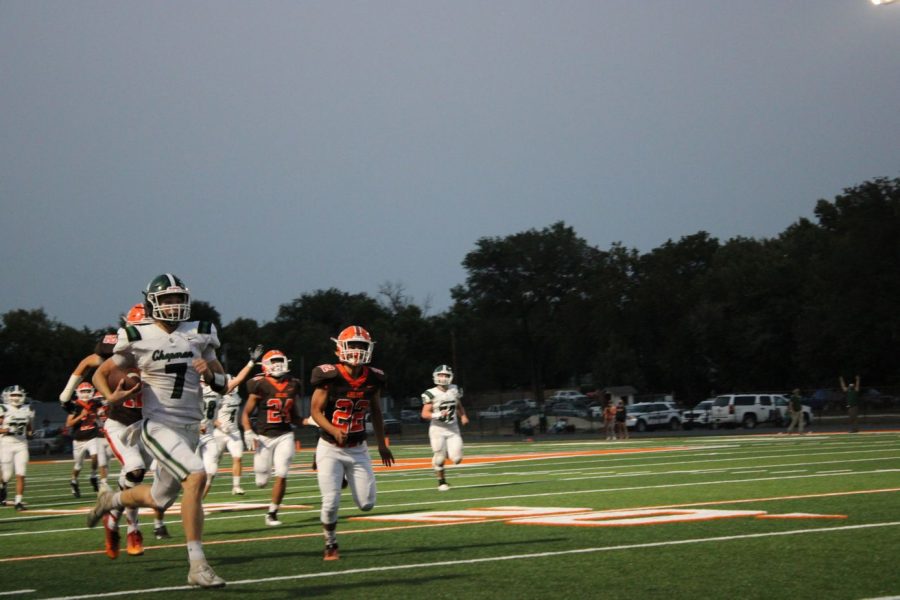 This past week the Abilene Cowboys played the Chapman Irish, a rivalry which was formed in 1892. Which is 128 years of pranks, blow-out games, and the never forgotten trash talking. On September 18th these two teams went back at it on Abilene’s new and improved Paul Dennis Field.

Senior Night and Homecoming were also a part of this night. This game, some players were out due to COVID-19 exposure. Quarantining players hit hard on this team, taking out the starting Quarterback Kaleb Becker. Another key player missing from the game was Senior Caleb Burt, leaving J’angelo Herbert to step up his game.

Before the game, Coach Brad Nicks brought in guest speaker Keith Wetzel who graduated from Abilene in 89’. While giving a speech to the team he addressed them as family. He mentioned that it does not matter where you come from but tonight it does because this is Abilene v. Chapman Week.

After the first quarter the Cowboys were still struggling, with the score at 14-0 Irish up. Even with J’Angelo Herbert putting up some big runs the Cowboys just could not score. The Irish defense was making this Cowboy offense work for every single yard. At halftime the score was 34-0, but the homecoming crowning was what most people came for.

The Homecoming Queen candidates were Brynna Ade, Aly Johnson, Bailey Rock, Allison Liby, and Claire Weishaar.  Each candidate had something good about them. Brynna representing the Volleyball Team, Bailey representing Cross Country, and Aly, Allison and Claire with being apart of the AHS Band. After a school wide vote, the students selected Aly Johnson as the 2020 homecoming queen.

The entire game had its ups and downs. Many touchdowns were given up, interceptions, and special teams mishaps. This Cowboy team is in its rebuilding stages. The final score was 46-0, an Irish Victory. The Cowboys have been outscored 145-0 in the past three games. Injuries have also been right up there including this game itself. Regardless, this game did not fall the Cowboys’ way in many facets.

Even though Abilene did not come out the victor, there are still many things to be looked upon. This rivalry will not be going anywhere, so until next year.