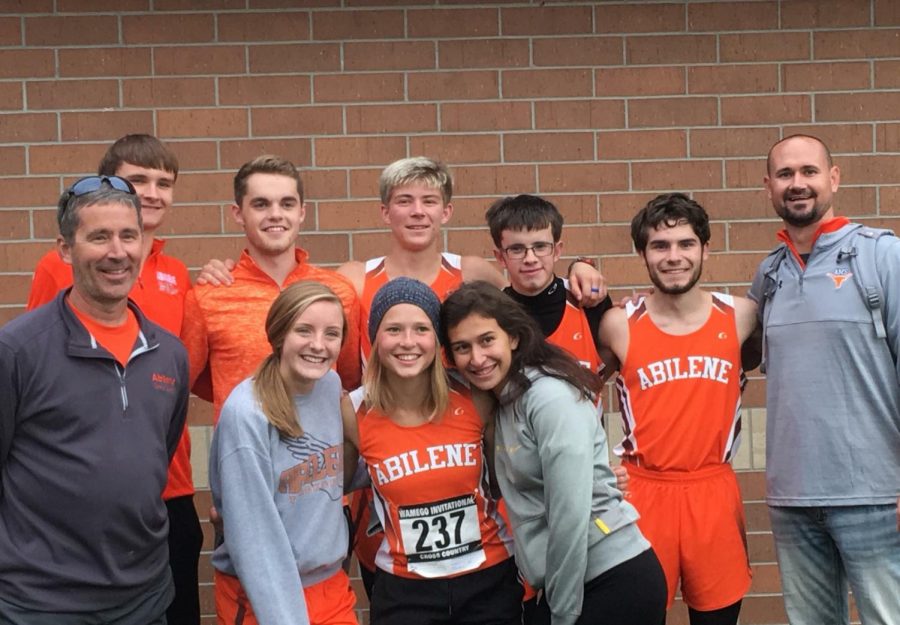 The Abilene High School cross country team has a total of 25 members, three coaches, and one manager. This season, there were 10 meets, including NCKL, Regionals, and State.

At NCKL, Sydney Burton placed second and Annie Bathurst placed 14th. Sydney placed fifth and received medals at Regionals and State. Congratulations to those who placed!

The new coaches this year have been getting a lot of positive feedback. From diversifying the workouts to practice to focusing on everyone instead of the top runners, Aaron Geissinger stated that “I feel like we were getting better for once, and I feel like people were giving their all to the season.” Geissinger felt that the team was more unified with the coaches, saying “They were easy to talk to, constantly cheering, and always willing to help out.”

Although conditioning and practicing takes a lot of work, the runners and coaches have made some fun memories with each other. “We went out to Browns Park for our workout. The coaches took bikes and rode along with the runners. Afterwards, we had a watermelon feed.” stated Coach Cook.

”My favorite memory would be running in a pack after a rainy day. I was hopping around a puddle and fell down and was covered head to toe in mud. We all laughed for the next mile about it!” Senior Abby Barnes retold.

Senior Lucas Cook carried a different type of memory with him. “We’d go on long, slow runs with everybody. We had good conversations between breaths. I think that’s the biggest takeaway that I’m gonna take from this season: those conversations and how much of a team we really were.”

It’s probably safe to say that every runner has a best meet and a worst meet. For Senior Damian Hartman, his best meet was in Wamego. “I just felt like I competed well. It was probably the best I felt.” For his worst meet, it was the dreadful Southeast of Saline meet. “I passed out from heat exhaustion.” said Hartman.