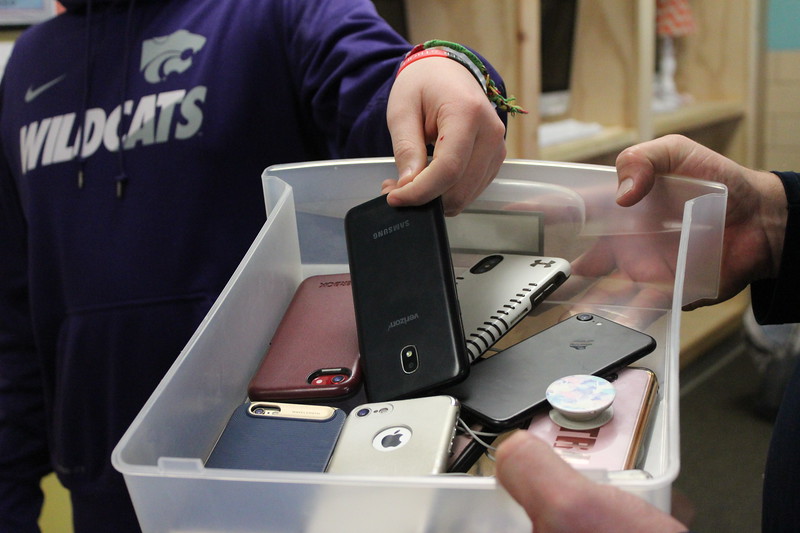 Rumors of the impending phone policies have spread like wildfire at Abilene High School. With no set guidelines, the idea of establishing some has caused confusion and even some uproar from the students.

The rumor is: next semester students in all classrooms will have to hand in their phones at the beginning of class. They will be kept in an area until class is over, and then returned to their owners. This type of guideline is only enforced in a few classrooms currently.

Most students at AHS believe that this isn’t the best plan of action. “Everybody’s going to keep doing what they’re doing…They should keep it how it is now. If you see a student on their phone, just take it.” stated junior Emma Allen stated. Teachers are allowed to take students’ phones if they are caught using the devices without permission.

With taking phones, teachers will have to deal with the backlash. Getting a phone taken away by their teacher isn’t typically a thing students love, so the chances of a student refusing to hand in their phone or causing a scene is pretty likely to happen.

Tiffany Carriker, a senior at AHS, gave an example of how teachers should handle phones. “As technology advances, we’re going to have to put new policies in place. For those who have had Mr. Wilkins, he has a really nice set of rules: don’t be on your phone but you are given a phone check.”

With many teachers being greatly concerned with phones in their classroom, math teacher Andy Cook doesn’t have the same problem. In his classroom, students are not allowed on their phones while the lesson and notes are given. During homework time, students are allowed to listen to music. The only way these oncoming policies would affect Mr. Cook’s classroom is during work time, when students are more prone to distractions.

The policy was passed and will take affect January 3rd, when students come back work from their Winter Break. According to principal Ben Smith, the phones will be placed in a container at the beginning of class. “Students are allowed to posess cell phones on school property and are allowed to use them before school, after, during passing periods, and during lunch.” Phones are not allowed to be on and in use during classes.  This is to eliminate the distraction of the addictive devices from the students, and to possibly lower the stress that social media can have on youth.