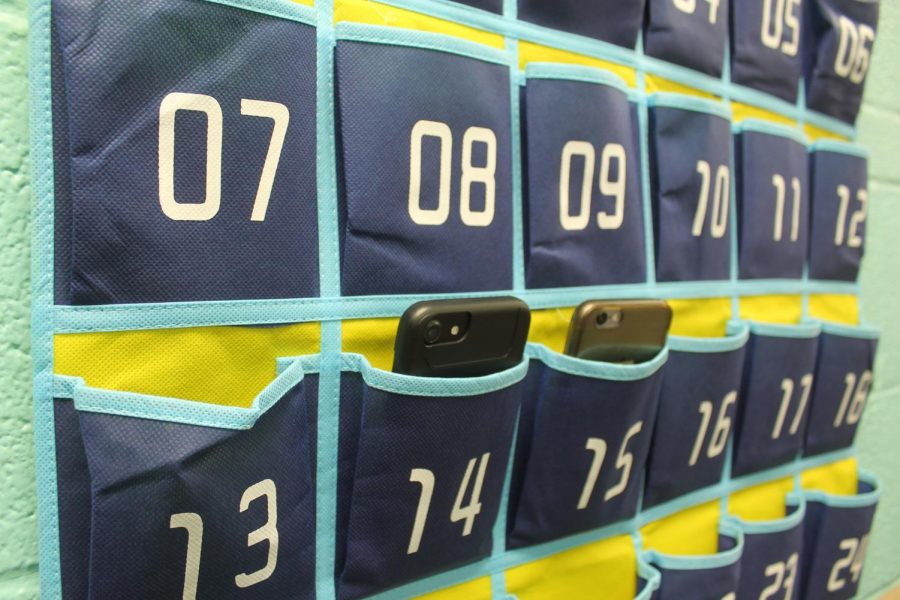 At the beginning of the school year in 2018, there were talks and rumors about a new cell phone policy that would be coming to Abilene High School. At the start of the second semester in 2019, when students showed up to class at 7:55 am, they walked through the door and saw 30 pouches hanging from the wall. Then students came to realize that they were for their phone. The rumors and talks had all been true. I interviewed five AHS students about their opinions on on the new cell phone policy, and how it has impacted their life at school. When asked about how the new phone policy was handled, Junior Zach Juhl responded with, “With the students, it was handled poorly because obviously they don’t like the fact that the school is taking our phones away.” He also said, “Us students can be less addicted to our phones, and have more self control.” He was then asked about how the phone policy was before the new pouches were purchased for the classrooms, and he answered with, “Personally, I was fine with it, you know? I was getting good grades, giving a lot of free time with my phone because I was getting my work done. But there were some students that were being immature and stuff like that, who ruined it for us.”

I then pulled Jack Graefe aside to get his intake on the new phone policy. I asked him,”I don’t know, I think it was pretty good, but I don’t think it really made a difference though. Im not really on my phone more or less then I was before the new policy started.” He says, “I honestly think the phone pouches are unnecessary and we could’ve just told people to put their phones in their book bags. He was then asked, “How do you think the phone policy was before the new phone pouches were purchased?” He said, “I think that it was fine for those that could handle it, but I guess if there were people that couldn’t handle it, then it wasn’t very good.” He also stated, “There are students that are responsible with their phones in school.”

Sophomore, Ashton Roth gave me her thoughts on the phone policy at Abilene High. She said, “The phone policy was handled okay but, it is a little extreme like taking it away during seminar.” She says, “It could’ve been handled better by not making such a big deal about it and not buying the pouches, I think it would’ve been easier by just telling us to put it into our book bags or it will be taken away.” When asked about how she thinks the old cell phone policy was before there new pouches were bought, she said, “It was okay, I think the teachers were more lenient if you don’t have the phone pouch, like if you need to text some one or call someone then they will let you. With the phone pouch on the other hand, you are not even aloud to take it out of the pouch until the class is over.”

I reached out to the West Country Mart store manager, Chris West and got his intake on the cell phone policy in his store. I asked him about his view point on the Country Mart cell phone policy and he said, “I think its great! We have had many customers say that it islet not seeing cashiers and carry-outs on their phone. Employees can concentrate on work more now instead of who their next text will come from.” So, all together, it sounds like students at Abilene High School are not very pleased with the new cell phone pouch policy. Adults on the other hand, are all for it.