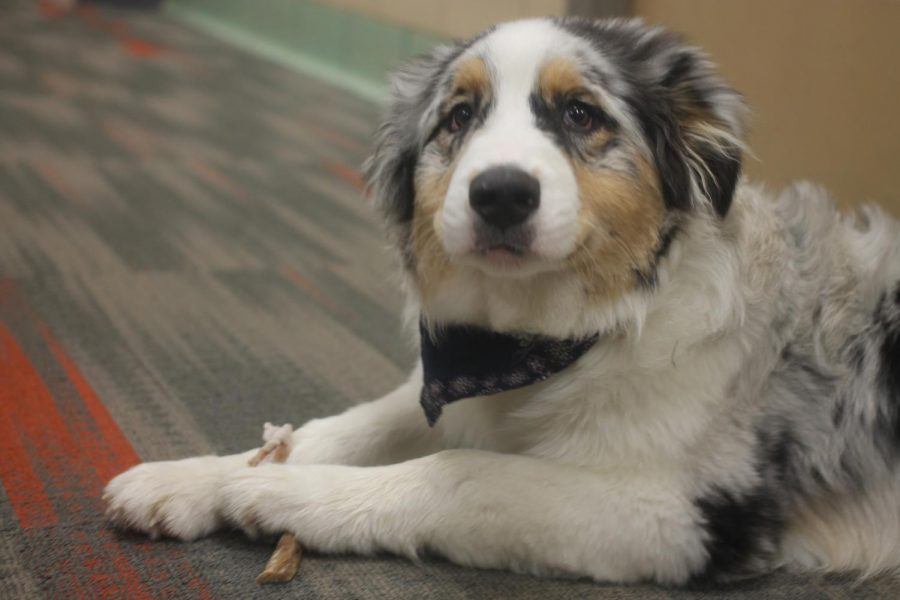 Dogs have long been man’s best friend, and that special relationship continues to exist today in almost every environment.

Ike, the young Australian Shepard, is only about five months old, so he is not yet an officially certified therapy dog.  Therapy dogs to-be are typically evaluated when they are a year old.

They must learn to behave appropriately in environments with varieties of people as long as directional and positional skills.

Therapy dogs are are not the same as service dogs.  Service dogs have a single person in which they are responsible in helping.

For instance, service dogs are sometimes used by the blind or by a person with a different type of psychical disability.

Therapy dogs, on the other hand, are typically seen in schools or nursing homes environments.

Service dogs have special privileges such as restaurant access or public transportation access whereas therapy dogs don’t.  These privileges exist in order for the dog to properly aid their owner with specific tasks or extra guidance.

Service dogs are also not allowed to be touched unlike therapy dogs who welcome being pet.  It is best to ask the owner for permission first so that the dog is able to learn not to run up to every person to be pet unless told to do so.

Mrs. Weaver, Ike’s handler, has been working hard to teach Ike not to run up to each student for attention.

The teething puppy has been received with open arms by many of the AHS student body as he learns the ropes of being a therapy dog.  With fur as soft as his, and of course, those undeniable puppy dog eyes, it’s hard not to like Ike.

When asked if she had initially intended to raise Ike as a therapy dog, Mrs. Weaver said, “Yes, I specifically went out and looked for a suitable therapy dog, which is how I picked out Ike.”

While all dog breeds can be raised as therapy some breeds are definitely better in social situations than others.  All it takes is a calm demeanor and the right training to become a therapy dog.

Dogs have always been a source of reliability for many, and Ike is no different as students learn and focus when around him.