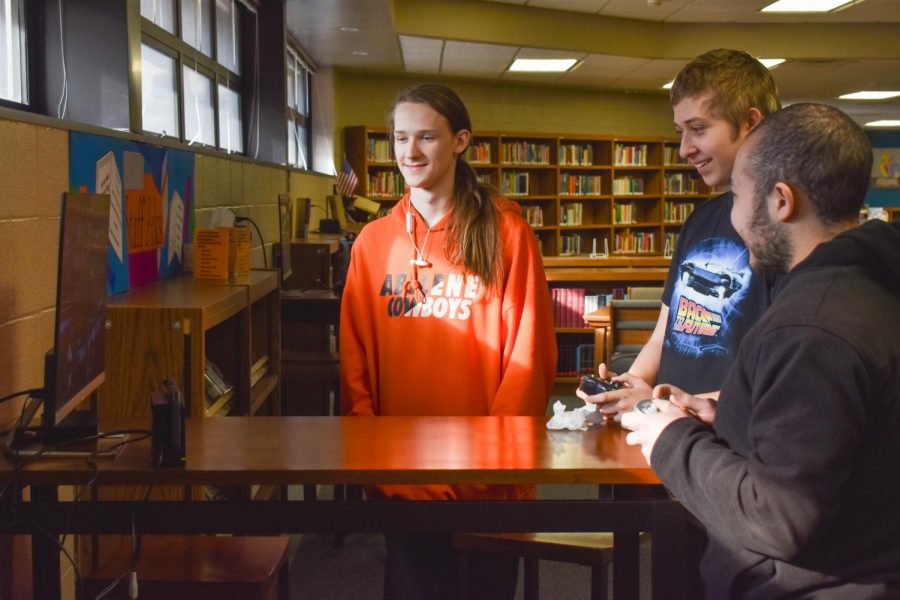 Students are practicing for E-Sports competition in the AHS media center earlier this school year.

A lot of the spring sport athletes were devastated to hear the news about the cancellation of all spring sports due to COVID-19. All of us that are not competing this spring are truly feeling sorry for the athletes, especially the seniors. For some of these seniors, this spring season was going to be the highlight of their years but it had to be cut short. We all knew that this virus was going to get bad, but none of us were ready to hear the news about everything being cancelled. Although, there is one sport that isn’t cancelled, eSports.
eSports is a new form of competition that is happening all around the globe.  There are approximately 270 million participants around the world and Abilene High School is competing in their first ever competition as a whole group, led by Mitchell Burkett, a science teacher at AHS.  Six students have signed up to compete in the Spring Majors.  These students are taking their interest in gaming to the next level by registering in the competition.  As with most sports, there is an expense to participate.  They don’t need to buy new shoes or equipment.  But they do pay $20 to register.  This makes them eligible to play in the highly competitive Spring Majors. It also opens up the potential for scholarships down the road.  Universities are forming esports leagues and looking for players.
The most popular game that most of the eSports athletes are playing is “Super Smash Bros”. It is a fighting game with a lot of the main characters from the other popular Nintendo video games. Usually, a player “mains” a character, which means that the character they chose is their number one character to go to and play with. Each player in the match starts with 3 lives and fight until there is a winner. In the game, health is backwards, damage is increased other than health being reduced. The first person to run out of lives first loses the match.
Our very own Abilene High School has 6 players signed up to compete in the Spring Majors. Each student put down a payment of $20, but the price may change as the season goes on. The students participating are: Keenan Melton, Davis Thurston, Jonah Leder, Mason Reeves, Connor Sloane, and Tyler Waid. For a student to participate, they have to follow similar guidelines as those who play regular sports. They must follow the eligibility policy and maintain professionalism.

Players from Abilene High have the ability to play with other players from any location. As long as students within their own ranking. AHS uses the official High School Esports League (HSEL) website to meet and compete.  It is highly organized and allows the students to interact with their competitors.

As of right now, our eSports competitors are getting their feet wet since this is their first year of professional participation. Everything about it is new, so the players and coaches are still learning.  But with this first season underway, they’ve found playing in the eSports league is pretty straightforward.  The competition uses a queue system which means the students may select from a variety of times to compete.  Then they just log on to the website and game at the same time with the competitor.

This will be something the AHS community will be able to brag about for years to come, stay tuned. Interested in playing?  Contact Mr. Burkett!