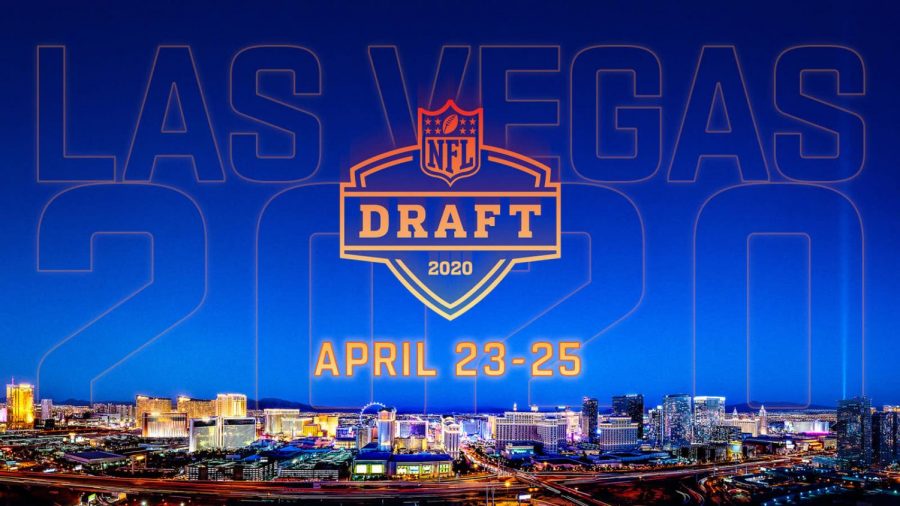 The past three days were some of the most exciting for football fans all over the world. After watching college football all year and the scouting combine looking for what players their team should draft, fans finally get to ease all of their tension because the draft started on April 23rd and continued until April 25th. It was a very special draft being that it was the first ever virtual draft. The draft was originally supposed to take place in Las Vegas, Nevada, but then the COVID-19 pandemic broke out so they had to call an audible on this year’s draft.

Now this is supposedly to be a historically DEEP wide receiver class this year. With the likes of young talents CeeDee Lamb, Jerry Jeudy, Henry Ruggs III, and Justin Jefferson being featured playmakers at wideout. The draft had a crazy total of 36 wide-receivers taken throughout the seven round draft. That ties a record from the 2003 draft since they cut the draft down to seven rounds in 1994. The 2003 draft produced receivers like Andre Johnson, Anquan Boldin, Brandon Lloyd, and David Tyree. So it will be interesting to see how this year’s receivers stack up against 2003’s legendary lineup.

With CeeDee Lamb drawing comparisons to Deandre Hopkins with his tremendous athletic and catching abilities, also his stellar dreadlocks. He seems to be a surefire superstar in the near future in the NFL. Alabama, of course, always produces pros, especially at the wide receiver position; Julio Jones and Amari Cooper for example.

This year they had two first round talents picked. The first one picked was the speedy receiver from Montgomery named Henry Ruggs III. He had the fastest 40-yard dash time in the combine this year with a run of 4.27 seconds. If it wasn’t for John Ross that would be a record for the 40 yard dash, which is currently 4.22 seconds. Henry Ruggs III draws comparisons to receivers like Desean Jackson and of course Tyreek Hill, but he might have even better receiver qualities starting out than both of them, which is a bold statement considering that both Jackson and Hill are both pro-bowl wide receivers. The “other” Bama wide receiver was considered by many to be the best receiver in this class. He draws comparisons to Alabama Alumni receiver Amari Cooper. With his stellar route running and catching ability and good speed, he is a matchup nightmare for corners trying to play him 1 on 1 in man coverage.

Now that we got the receivers out of the way, we can move on to a team with an absurd amount of draft picks. The Miami Dolphins had a dumb amount of 14 picks in this year’s draft, that means technically they had 2 picks per round. That also ties a record, but we won’t really get into that. Headlining their draft mecca they chose the 2018 National Championship hero, quarterback Tua Tagovailoa with the 5th overall pick in the first round. “Tank for Tua” had actually worked for the franchise that hasn’t had a pro-bowl quarterback since Dan Marino in 1994. With Tua’s rifle for an arm, and his exceptional field awareness, and smarts for the game. On top of being athletic he was considered a great pick, but he was also considered a risk at the same time. Tua Tagovailoa has had a history of injuries in his college career with the most recent one being a career threatening fractured hip injury during this past season. Now the last person that was a stellar football player that had a major hip injury was Bo Jackson, and he is considered by many to be the greatest athlete of all time, and even he couldn’t bounce back from it, so how can Tua? That’s a great question. According to all the medical staff in the NFL, Tua’s medicals check out. So if Tua can stay healthy, the Dolphins may have found themselves a franchise QB.

Now the team that wins the, “What the hell were they thinking?” award in this year’s draft goes to the Philadelphia Eagles. They did a good job in the first-round selecting prolific wide-receiver Jalen Reagor with the 21st pick to help Carson Wentz deliver the ball down field, but in the second round their choice left the sports world scratching their heads. They decide to choose quarterback Jalen Hurts with the 53rd pick in the 2020 NFL draft. Now I love Jalen Hurts, personally he is my favorite player in this draft, I’m not saying he is the best player in the draft but he is awesome football to watch. He also might have the most upside out of all the quarterbacks in this draft class. Even more than number 1 overall pick Joe Burrow (but more on him later). To understand why the Eagles drafted Hurts instead of maybe another wideout or maybe some defensive help you have to ask this simple question. What on Earth is wrong with Carson Wentz? Carson Wentz on paper looks like one of the better quarterbacks in the NFL. Scratch that, the dude is a beast actually. There is only one problem with Wentz. He cannot stay healthy to save his life. He hasn’t had a full season under his belt yet in his career and this will be his 5th season in the league. Now in the games he is healthy, Wentz is an MVP candidate, a pro bowler, and a Philly hero and icon. I believe the Eagles drafted Hurts as a type of “insurance”, because if Wentz falls to an injury, which he more than likely will, they have a young and exemplary leader and teammate who is a sponge when it comes to football knowledge who they can have some fun with. Now if Wentz stays healthy, which is a HUGE if, the Eagles have somebody who like I said earlier is an excellent teammate and football player. Hurts is easily the most athletic quarter back in this class. He posted a combine best for quarterback’s 4.59 second 40-yard dash. So the Eagles might be able to do with Hurts what the Saints are doing with Taysom Hill. It will just be like Hill on steroids due to Jalen’s shocking throwing ability. I mean the ball just LEAPS out of his hand. Also Jalen Hurts is a winner. Remember Tua Tagovailaoa? Ya who do you think the quarterback for Alabama was before him? Oh, well would you look at that. It was Jalen Hurts. Who before being benched at halftime in the 2018 championship for Tua had just lead Bama to a title win the year before. Then the year after he was benched he came in for Tua in the SEC conference championship game and led them to victory in that game as well. Now as the quarterback for Oklahoma, he led his to the playoffs only before being blasted by the eventual champion Joe Burrow and the LSU Tigers 63-28. So the Eagles have a very good “insurance plan” for Carson Wentz at the moment. Eagle’s fans should not be worried about this pick.

Now I couldn’t write a story about the draft and not talk about the number one overall pick right? Of course not. With the first pick in the 2020 NFL draft the Cincinnati Bengals select… Joe Burrow, Quarterback LSU. The story on Joe Burrow is an interesting one. Burrow was just a kid from Athens, Ohio with a deep passion. He would go on to be a stud football player at Athens High School. He would not be known as a sexy recruit by any means, but he would go on to sign on to Ohio State University. This is one of the blood schools for football in NCAA Division 1. Burrow would struggle to get any playing time at Ohio State though as he would never even start for the Buckeyes and eventually he would transfer to LSU. In his time at Ohio State he would only throw for 287 yards and 2 touchdowns. Now the year is 2018 and he is the new man on campus. Burrow had taken his talents to Louisiana State University. Enter Coach Ed Orgeron, who had the impossibly big shoes to fill for Les Miles who just a couple years before, was let go by LSU. Orgeron had been a decent coach so far but was struggling to return LSU to greatness. Now bring in Joe Burrow, who has a decent season in his first year there throwing 16 touchdowns and only 5 interceptions. Orgeron saw potential in this kid and decided to keep him as the starter going into the 2019 season. Now before the season started Joe Burrow was projected as a late round talent. He was supposed to be going between rounds 5-7. Then something unexpected happens. Burrow is a straight up stud. Throughout the season he slices up defenses with his precision passing and sneaky athleticism. Burrow would end up throwing for 5671 yards and 60 touchdowns with only 6 interceptions. He also wins the Heisman Trophy, which is given to college football’s best player for that season. He also would lead LSU to a national title with a perfect record for the season going 15-0. Simulate a few months later and he is the 1st overall pick by the Bengals. They were looking for a new quarterback to start with since Andy Dalton was no longer getting the job done. Bengals fans are hopeful that Burrow can produce like he did in college. If he can, then Cincinnati has a very special talent on their hands for years to come.

The biggest trend in the draft seemed to be picking players that are from where your team is located, or at least nearby. Take Joe Burrow for example, he is from Athens, Ohio which is close to Cincinnati, Ohio is located and the Cincinnati Bengals took him with the 1st pick. Then right after him came defensive end Chase Young with the second pick by the Washington Redskins. Chase Young is from D.C. and played his high school ball at DeMatha Catholic High which is located in Washington D.C. His high school is literally 20 minutes away from the Redskins stadium. Another hometown hero pick in the draft is tight end Cole Kmet. Kmet was chosen 43rd pick in the draft by the Chicago Bears. He is from Lake Barrington, Illinois. Lake Barrington is about an hour away from Chicago. I mean it is a good idea to pick a prospect that basically grew up in your backyard. That is if they are a good prospect overall. The sports world has seen examples like these succeed and it’s great for that clubs business and for the city. The most notable of course is in a completely different sport but still is the same idea. LeBron James was picked by the Cleveland Cavaliers with 1st pick in the 2003 NBA Draft. Yes its basketball but you get what I’m pointing at with this statement. If the prospect turns out good, then your clubs funds flourish and the city has a new hero to look to and adore.

That’s my review of this year’s draft. I would’ve said much more but that would be impossible without me covering all seven rounds of the draft which I don’t have the time or energy to do. Only time will tell how these prospects pan out in their own respective careers.